How did Carrie Bradshaw afford her LIFESTYLE 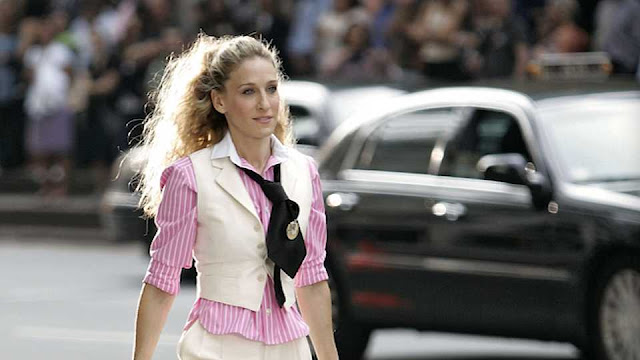 There I was — sitting in my bedroom on a regular Friday night watching Sex and the City re-runs when it hit me! How the heck did Carrie afford her Lifestyle? We know she was a freelancer columnist, but realistically the amount she made could not cover her daily cab rides and $25 cocktails for a week let alone afford her a posh apartment in the middle of Manhattan.

After 20 years, the writers sold us a dream that was far-fetched and downright unrealistic giving us false hope of Life in New York City. They made it seem that once you are stylish and have the right connections you would automatically live an enviable lifestyle. I had the pleasure of visiting New York in February for Fashion Week and it was hella expensive! Even the daily commute on the subway that us common folks take was expensive! I did some digging and realized that there was an interesting incident when f$ck boy Aiden broke up with Carrie and told her she had 30 days to make a down-payment or she would lose the apartment. In true Sex and the City Fashion- the money talk was discussed over “drinks”  and was deemed as a sensitive topic where all but well-to-do Charlotte offered to help Carrie who described her situation as being in a “financial cul-de-sac“.  Carrie received a loan from Big vis a vie check where she was advised by her friends not to take it.

Carrie then visited Charlotte in her own house after taking a $5 cab and walking a couple blocks. The women went on trading harsh words where Charlotte reminded Carrie that it wasn’t her job to clean up her financial mess.

We then later know that Charlotte gave Carrie her engagement ring who then used it as a downpayment for the apartment. We also assume that Carrie paid back Charlotte monthly (after picking up several freelance jobs one being at Vogue for $4 per word) as this money was a loan rather than a gift.

A Sex and the City mystery has been solved! Do you remember your favorite episode?

Do you believe you are obligated to give your friends money when they are in need?

Hello There ??
—————————————————————————————————
We have a small favor to ask. People are reading the Haute Lifestyle than ever since our recent placement in the South Florida Blogger Awards but advertising revenues across the media are falling fast. We do not have investors and everything Blog related is funded out of pocket– we want to keep our journalism as fun and open as we can. So you can see why we need to ask for your help. Our article takes a lot of time, money and hard work to produce. But we do it because we believe our perspective and voices matter – because it might well be your perspective, too.
If everyone who reads our posts, who likes it, helps fund it, our future would be much more secure.
For as little as $1, you can support The Haute Lifestyle
– and it only takes a minute. Hit the “DONATE” button on the top right sidebar. Thanks in Advance
IMAGES MAY BE SUBJECT TO COPYRIGHT | NO COPYRIGHT INFRINGEMENT INTENDED
GET SOCIAL WITH US!Having an event? Invite us
Facebook: https://www.facebook.com/HautePeople
Twitter: @hautepeople
Instagram @haute_people
Pinterest: http://www.pinterest.com/hautepeople/
Join our Site: www.hautepeople.net